an excerpt from A Different Acquaintance, a novel by D. L. Pughe 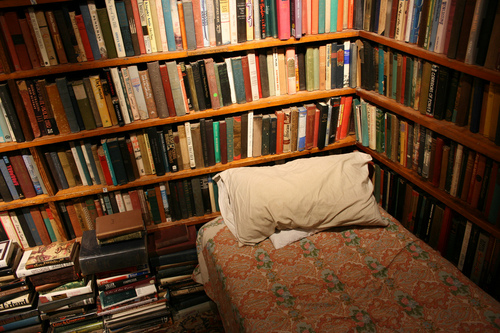 Mayer is on his side again, on a slim leather couch in the cramped but magical guest room of his old friend János, a professor at the New School in New York. A few decades ago János proudly showed him how he had taken over the large closet in his tiny apartment, built maple bookshelves all the way up to the high ceiling and inset a desk with intriguing compartments into one wall. On the wall opposite he managed too squeeze in the small sofa. Books filled the four walls and in the narrow space around the door jam he made shelves for LP’s and a niche for his stereo and a short-wave radio. Speakers rescued from broken TV’s left on New York streets stared down with round faces from each of the four upper corners.

“A cathedral in a shell…” Mayer had said when János demonstrated the acoustics.

“Exactly…” his host smiled then brought out his most extravagant purchase —thick, soft leather-padded headphones for working late into the night.

It was here on the leather sofa straddling the wall opposite the desk that Mayer surveyed the changes over the years. He was still surrounded by books, in fact they were now stuffed into every shelf and stacked on the floor. Some shelves had been covered over with framed prints and sculptures had been pushed into niches made by smaller books.  The closet had slowly grown into a cabinet of curiosities. The small couch, just the length of Mayer’s frame, is where he has always slept in New York over the years, preferring it even when his travel funds could afford a grand hotel. The niches for LP’s had been subdivided, first for a phase of cassette tapes and then re-configured for CD’s which jammed every crevice and were stacked in towers in front of the shelves. As time went by, the books in Hungarian had risen slowly to the top of the shelves, the books in English and French gradually took over the lower ones surrounding the uneven piles of papers spilling over on the desk. The stacks of books and CD’s left only a small bit of floor uncluttered making the approach to the couch a slalom over the thick Turkish carpet. And though it still looks like a fine leather sofa, the burnished sheen of years adds to how one sinks into its curves and sags. Not nearly as comfortable as it once was, like age itself it’s familiar embrace is holding its own.

Each time he re-enters this chamber, Mayer is reminded of the festival of Corpus Christi. Southern Mediterranean families bring out their most valuable wealth on that holiday, stacked in front of their homes as a ‘technical’ offering to Christ. A sort of innocent ostentatiousness, Mayer feels, though his Catholic friends find the display as embarrassing as the ancient barter for indulgences. Sometimes, though, abundance can be bolstering; a sense that life on earth has its rewards that the distant whiff of Heaven cannot know. And in János’ book-laden closet, Mayer always finds the overwhelming rush and force of curiosity as though he has crawled inside the human mind itself.

He had come in late at night, barreled into the city in a cab holding tight to the leather stirrup as they swerved through traffic. His exhaustion was so great that even János’ exuberant talk didn’t revive him and he was allowed to go directly to the comfort of the closet. He removed the stiff and somewhat prickly cushions made from Turkish carpets from the back of the couch and stretched out with the soft blanket. He reached up and instinctively turned off the small intense lamp over the bed.  With his other hand he reached the knob below the glowing numbers of the shortwave radio; it’s awkward antenna slanted to the ceiling. The FM station was playing Kodaly’s Variations on a Hungarian Folksong, and he listened for awhile as though struggling with a giant earpiece. Soon even this tired him. He turned the dial past rapid French, rolling Spanish, exclamations in Russian and Chinese and struggled to finally find a station with BBC news from distant corners of the world.

For some time now he had turned first to words before sleeping. In the beginning it was listening to trustworthy-sounding British voices describing revolutions in places he’d yet to imagine.  Then, hearing accounts of survivors gave him a kind of courage to face what outwardly seemed like calm, reasonable days in a rich, fairly ordered democracy. But his days carried with them the undertow of losing friends he loved most to illness or distance. The ensuing loneliness would sometimes sap his ordinary strength.

It wasn’t just hearing about events around the globe and how noble individuals rose above their circumstance that gave him back a reservoir to draw from.  Their voices offered a way into being in the world, invisible and nearly always in the dark; taking his imagination to the furthest reaches of hope.  While searching through the scratchy tuner, Mayer passed jumping beats of the local hip hop stations, the stops and pauses of classical music followed by rapid sawing violins, then a gyrating saxophone with insistent originality. The blaring lyrics of popular music were the most painful and he fumbled in irritation as he rolled past.

Why the need for words, he wondered, when any one of these local places on the dial should be able to hold his interest?  It used to be his great pleasure to decipher who else could be listening at this hour, imagining people in cars, in hotel rooms, in the tiny dark apartments of towering buildings nearby who were possibly sharing the same sound. But Mayer needed to be far beyond the immediate city, to speed out over the dark waters of the Atlantic toward the lights of Europe slowly going out as the day dawned. To hover over Budapest long enough to spot his grandmother’s apartment.  And from there to soar over the snow covered Alps, the dusted white steppes of Russia and arrive somehow, through some faint mention, at the mysterious terrain of outer Mongolia.

There, in a small room in Ulaan Bataar, perhaps there was a young woman who had just returned from her day at work, lay on a small sofa and picked up a book. Leaning back to think, had she also turned on to music, then bypassed several channels in indecipherable languages, news reports of the capitol and then events in India-accented English, and found herself for a moment also tuned to the BBC?  Was this what Mayer was seeking, a coded message across thousands of miles? He imagined her listening quietly to the same news, the frequent suicide bombings that still caused anguished sighs, the dramatic weather devastating new regions and, with relief, candid survivor’s reports.  Then the authoritative crisp voice would somehow shift to UK business, the debt-ridden railway system, clogged healthcare, the doings of the royal family. At this, Mayer knew, the young woman might sigh again, and turn the dial in search of music, slightly astonished that a slow bass and now soothing saxophone were making their way to her across the universe of sound.  At that moment, Mayer turned the dial again and found the greatest consolation:  Thelonius Monk was playing slow, deliberate chord after chord.  He finally drifted off to sleep in a distant inner room where Monk was somehow communing with Vladimir Horowitz, a peaceful place of shadowy radiant light.