Two Poets of the Street

Maeve Brennan and Vivian Maier shared a lifelong rummage for meaning in the corners of their solitary lives. In the continuous bustle of urban existence, they each paused not to stare but to capture what is usually overlooked in timeless and haunting images.  Their poetry remains in how they transformed ‘the seemingly banal into the arresting and beautiful.’

Vivian Maier, whose photography has only recently come to wide attention, was born just 9 years after Brennan in 1926. Both were emigrants—Brennan grew up in Dublin then Washington D. C. and came to New York in the 1940s. Maier spent much of her childhood in a haut alpine village in the South of France and returned to New York, where she had been born, also in the 40’s. Was it their foreignness, in an era when America floated bright promises abroad, that made the gritty realities of the street so hypnotizing when they arrived?

Brennan found work writing, first for the Irish press, and then producing vignettes for The New Yorker under the byline: the Long-Winded Lady. If anything, her writing was breathless and brief, able to capture volumes in just a few paragraphs. Brennan explained it best: “Moments of kindness, moments of recognition—if there is a difference, it is a faint one. I think the long-winded lady is real when she writes, here, about some of the sights she saw in the city that she loves.” 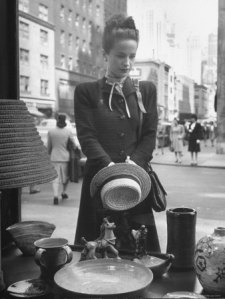 Week after week, in a rented room in one hotel or another, Brennan looked down on the street below and captured what the crowds rushing by did not see. In I Look Down From the Windows of This Old Broadway Hotel, she describes the rooftops of Times Square and a trombone player working a Broadway show who, in between performances, often came to the roof.

“One evening he turned up on the roof at seven, clearly visible in the azure autumn air. He took his stand at the roof’s edge and began to play, and at that moment an extremely tall young man stood up between the two blue-painted water towers of the Flanders Hotel (twelve stories high, to my left) and began playing the clarinet. They both seemed to be playing “A Gypsy Told Me.” The trombonist, a few stories above the crowded street faced east, and the clarinetist, half a block away from him and twelve stories up in the air, also faced east, and all around them, above and below, on both sides, and in all directions, far and near and high and low, they were surrounded by walls of windows—hundreds and hundreds and hundreds of windows—and all the windows were blind, because there was not a face to be seen in any of them.”

Brennan had a vantage point that many shared but, apart from Hitchcock’s Rear Window, few managed to capture so well. While staying in her friend Howard’s apartment in Greenwich Village of the 1960’s, Brennan took pains to describe the sounds of a nearby cocktail party and of her solitary room some doors away:

“The rain is falling fast and black as ever. The windows of the front apartment where the party is must be steaming with rain—frothing, almost—and Tenth Street must be streaming, too, and frothing black. But a cocktail party has to expand, if it can, and now the people in front have opened their door and left it open. What a lot of noise they are making with glasses and bottles and music and voices! They must have hundreds of people in there. Once in a while, over the low roar of conversation, there is a loud laugh, and once in a while a little shriek. Outside all the noise in the world is being hammered into the earth by the rain, and inside, all the noise there is effervescing at the cocktail party. Only in this room there is stillness, and the stillness has gone tense. The room is waiting for something to happen. I could light the fire, but my friend forgot to leave me any logs. I could turn on a lamp, but there is no animal feeling in electricity. I stand up again and walk over to the phonograph and switch it on without changing the record that I played this morning. The music strengthens and moves about, catching the pictures, the books, and the discolored white marble mantelpiece as firelight might have done. Now the place is no longer a cave but a room with walls that listen in peace. I hear the music and I watch the voice. I can see it. It is a voice to follow with your mind’s eye. “La Brave, c’est elle.” There is no other. Billie Holiday is singing.”

Brennan lived first in rented rooms, then increasingly cheap hotels and, when friends offered, apartments like Howard’s where she could hole up for awhile. The chance sightings she reported were as a witness for the unnoticed:

“One evening lately I saw the old lady sitting at her window, facing west or, rather, facing the west wall of her room. Her hair is completely white. She was reading what appeared to be a letter, holding it an angle in front of her as you would a newspaper. It was one of those lucky evenings when the white summer day turns to amber before it begins to break up into the separate shades of twilight, and in the strange glow the towering outline of the city to the south turned monumental and lonely. The Empire State changed color suddenly, and lost its air of self-satisfaction. Nothing was really certain anymore, except the row of pigeons standing motionless on the western wall of the pink terrace, and beneath, the old lady calmly reading her letter. Without turning her head she put her right hand with the sheet of paper in it out the window, stretched her arm to full length, and let the paper go. It fluttered down and away, and she went on reading. There was a second sheet to the letter. She did not look out. She did not see the amber air, and she did not notice the violet blue vapor that drifted in transparency across her window, carried on a very timid little eastern breeze. A second time she stretched out her arm and let a sheet of paper go, and she continued to read. The third sheet followed the first two uncertainly down the wall of the hotel, and then she stood up and vanished at once into the dimness of her room. There was something very housewifely about the decisive way she left her window and her geraniums. She is on the tenth floor, but she might just as well have been leaving her ground floor window after having spent an hour gossiping with her neighbors and watching the market bags to see who was having what for dinner. A good many of the ordinary ways of living go when people begin to live up in the air.”

The year of the falling letters was 1969, and Brennan’s assignments from the New Yorker were declining. She began to be seen as a ghost at their offices near Broadway and 43rd St. Brennan had entered New York literary circles as a petite and chic Irishwoman in the 1940s. Photos from her early years show the bright intelligence with upswept hair, the steady eyes. Then,  beginning to look seriously over her shoulder. 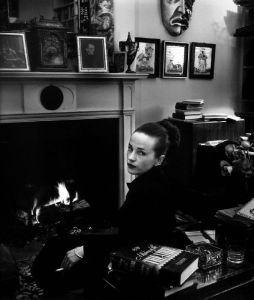 In 1954 she briefly married the wrong man, an alcoholic womanizer and fellow writer. By the 1970s Brennan herself suffered from alcoholism and increasing paranoia and was rumored to sleep in the restrooms of The New Yorker. Colleagues and friends tried to rescue her from time to time offering funds and occasional refuge. Her homeless state ended at a nursing home in Queens where she died in 1993.

Brennan had written stories and The Visitor, a novella which hint at cruel family treatment at home in Dublin. She shares these mysteries of an abusive past with Vivian Maier who returned to New York from France in the 1940’s. The documentary film Finding Vivian Maier suggests a troubled childhood recorded only in the recurring themes of Maier’s obsessive collection of newspaper clippings.  When she left France she was armed with a camera and had been taught photography by her mother. Back in the States Maier found work as a nanny and enjoyed the freedom it gave her to walk the city, first New York and then for 40 years the streets of Chicago. The viewfinder of her Rolleflex allowed her to take street portraits unnoticed and include herself in reflective surfaces and shadows. Like Brennan, these early self-portraits convey Maier’s innocence and curiosity adapting itself to the craft. 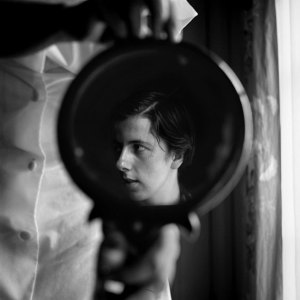 The life of the city caught in Maier’s poignant split-second compositions are as accomplished as the ‘decisive moments’ of Cartier Bresson and Robert Frank.

That Maier never chose to share her photos or even develop some of her film suggests that it was the second of capture which gave her pleasure. She wore the camera everywhere, always alert to what might transpire.

Maier recorded subtleties of affection with respectful distance but not, perhaps, without longing.

And she had an apparent fascination with aspects of personality, how a single look can convey a whole world view—how the God in details places us in the spectrum of fortune and fate. 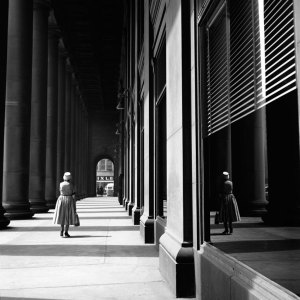 For all her reputed shyness, many of Maier’s subjects gaze back with a complicated but open trust.

In a photo from her early period, in the mirror a man is removing from a truck, there is Maier—smiling. She’s caught the rare moment that only she noticed, and captured herself too. While a testament to her talent, it is the best clue to her satisfaction. 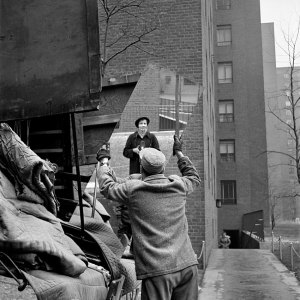 Like Brennan, Maier’s eccentricities grew exponentially over the years and became more isolating. The kindness of past employers kept her from being homeless, and a fall on ice also led to a nursing home in her last days. She died in 2009 at age 83, having outlived Brennan by just a few years.

Maier and Brennan mined city life for the sorts of meaning that make humanity a shared experience.  Like Emily Dickenson, their thoughtful observations were made in isolation.  The path of their lives, the challenges age poses to sensitive creative souls, can hopefully enlarge our understanding and care for everyone we encounter, especially those who are the easiest to overlook. And their works, the collections of Maier and Brennan, encourage us to pause and consider, to take the time and have the courage to make sense of what we see.

Note:  This essay is copyright 2014, D. L. Pughe. The quote defining poetry at the end of the first paragraph is by my dear friend, Margaretta Lovell.

All photos except for the 3 of Maeve Brennan are by Vivian Maier and copyright is primarily with:   John Maloof’, who purchased a large portion of Maier’s work at auction, Jeffery Goldstein also controls a substantial number of images and Ron Slattery, who bought a smaller collection of Maier’s negatives and prints in 2007, before her death.

1 Response to Two Poets of the Street