Well before CGI made spectacular vistas so common, there was the 1947 technicolor film Black Narcissus. Based on the novel by Rumer Godden, it is about the passions of nuns in the high Himalayas.  Their convent is a remote cliff-side palace near Darjeeling that was once used to house the concubines of a princely general. 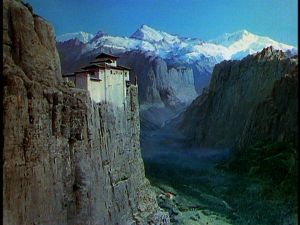 In this remote setting, Sister Clodagh, played by Deborah Kerr, is tasked with bringing a community of nuns to set up their convent, teach the children English and convert the locals to their religion.

She brings with her several willing sisters and one who they suspect is mentally ill, Sister Ruth (the amazing Kathleen Byron), hoping the alpine air will heal her. 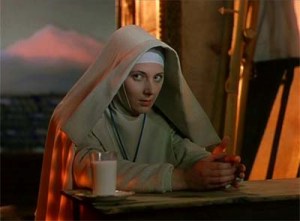 In spectacular flashbacks and dissolves we learn of Sister Clodagh’s earlier life in Scotland and what led her turn from her youthful lover to become a nun. The local young general, who studies with the girls in their school, brings with him jewels and scents, and the wind up the sheer mountainside also carries with it memories of passion.

Into this mix comes a Mr. Dean (David Farrar), the British raconteur who becomes their not so trusted local advisor as he makes his lust for life well known. 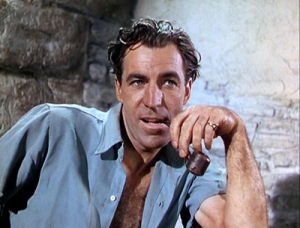 At his suggestion the nuns take in an outcast girl who attracts the eye of the young general. Played by Jean Simmons, Kanchi is a character so far from her role of Ophelia the next year, and her dance is captivating. 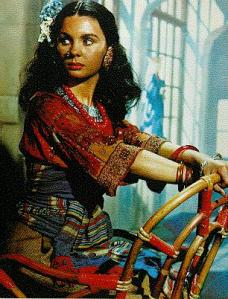 In the most lush color Director Michael Powell and the British-Hungarian producer Emerich Pressberger (known together as The Archers) worked with cinematographer Jack Cardiff to draw this exotic, mystical and passionate world into vivid reality. The scenes on the cliffside, the sheer verticality, the way that the wind flaps the habits of the nuns and disturbs their calm is unlike any other film before or since. 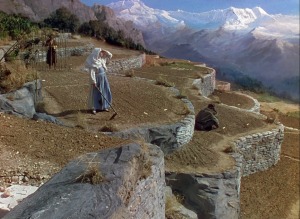 The essence of the place works on everyone and culminates in desperate acts.

The most fascinating thing is that the film was made at Pinewood Studios in London, using scale models and sets.  A few scenes were shot at an Indian garden in West Sussex.  Many contemporary filmmakers like Scorcese and Spielberg refer to it as a landmark in technicolor film and cinematography, a film creating a whole exotic world in the studio.  It is a film that casts a spell, encouraging one to keep thinking for a long time.

The Criterion version is wonderful, and I highly recommend the extras:  the analysis by French filmmaker Bertrand Tavernier, the short about the making of the film, and the commentary including Scorcese and Powell. One of the most satisfying recent experiences of  cinema I’ve had.